With its buildings rooted in granite foundations Helsinki appears to grow out of the very earth itself. Now, in 2015, it is a technological world amidst forests, and a recognizably European but still unique capital city. Here low-rise building facades have long reflected the low-slanting northern sunshine. Helsinki has in fact become a home environment where the conditions are exceptionally propitious for people to enjoy a good life.

Unfortunately, this cultural heritage – buildings and other historic landmarks – is also disappearing and being overshadowed by global fashions. Also at risk are stretches of natural coastline and water, and much-loved landscapes of rock and woodland.

Towards an urbanized world

With the majority of humanity now living in urban areas, anthropologists are also increasingly researching city life. Both the pace and scale of urbanization are striking in those places where cities are not actually dying. Some researchers even feel that one cannot treat all urban construction projects today as producing city-like conditions. Business-parks, mammoth residential blocks for migrant workers and gated but half-empty luxury complexes do not usually generate lively city environments.

Through history cities have been self-organizing places of diversity. Not so much any more, as urban scholar Saskia Sassen recently wrote.

The accelerating pace of urbanization processes is intimately linked to global financial circuits, and now appears to have reached Finland as well. A few years ago the biggest construction boom in over a century began to unfold in Helsinki. The Finnish capital, so the rhetoric goes, would become a metropolitan centre of international significance. Branding is needed, investments are sought, and a particular kind of attractiveness must be promoted.

Conversation is also an imperative, however. We residents are invited to meetings and unveilings of plans for new neighbourhoods and to participate in making places online. Actual listening is another thing, distinct from consultation as defined by the bureaucracy.

The changes in Helsinki are sometimes accompanied by rather colourful debate. The role of overseas investment has created novel types of political discord. Töölö Bay’s new construction, at the heart of the city and impossible to ignore, at least unites people in being loathed across party-political boundaries. In residential areas and elsewhere, Helsinki now appears to be reproducing the worst of global planning and building: layouts to suit the construction sector rather than home owners, over-designed and still bland semi-public space.

It was into this unhappy mix that design researcher Cindy Kohtala and I decided to venture with a book project. So many times had we raged about what is going on. As Helsinki residents – but also as semi-outsiders, Cindy being Canadian and I having lived abroad over half my life – we decided that from our perspectives we could try to inject a stronger sense of what Helsinki means and the significance of its specific identity.

Together we edited a book whose core message is that we can talk about the Finnish capital in more nuanced ways than has been typical so far. We could show that there is no one truth about the city, nor even two opposing truths. In our experiences there are in fact many Helsinkies.

The richly illustrated book, in three languages, is published by Helsinki-based Nemo publishing. The texts are written by 14 authors with experience of working with Helsinki’s buildings, and all of whom live in Helsinki, with the exception of Jonathan Glancey from Britain. Yet Glancey’s text is shot through with a palpable love for the city. 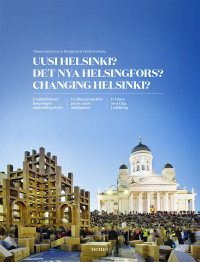 Our book highlights that the city is not just space on a map, neither is its significance reducible to investment opportunities or housing and other crises. Instead, Helsinki is a place. It is culture, collaboration and bio-physical processes that its citizens, in one way or another, are committed to.

And as the flourishing of new urban culture tells us, citizens are ever more actively making their city themselves. Urban gardens, restaurant days and active neighbourhood groups are no surface phenomenon: clearly they are more and more important in reproducing the city, something that municipal government is also starting to recognize.

Indeed, Helsinki has many examples of how protest movements and grassroots activism have been channelled into developing good governance. On the other hand, Finland’s political culture risks muffling debate about change, by seeing disagreement as party political.

Historically the vitality of cities has not, though, been based on bureaucratic institutions nor even on big business. Rather, in the liveliest cities, even society’s weakest have been able to make history and feed cultural dynamism. In our introduction to the book we cite architecture critic Michael Sorkin, who also knows and admires Helsinki. He has written memorably that “architecture is produced at the intersection of art and property, and this is one of the many reasons it so legibly records the history of communal life”.

This is also why construction projects deserve to be thought, talked and written about in careful, slow and deliberate ways, with and for more people than only architects, builders, developers and planners. Besides, it has been extremely rewarding to explore the process from the intersection of anthropology and design.

I hope you join the conversation, e.g. at the City Planning Department’s ‘Laituri’ exhibition space on Friday 4th December where, for a change, we will debate the city in the majority language, Finnish. Facebook link here.

The text above is largely based on the introduction to the book that we wrote together with Cindy Kohtala.