We, Guy Julier and I, wrote a text for a special issue of the Journal of Social Studies/ Sociální studia on “(Not) my green city? Green spaces in times of urbanization”, Vol 17, No 1 (2020).

It’s open access so you can get it via this link.

Like many good things, writing it came out of a series of serendipitous face-to-face encounters among academics. It was at a pre-zoom-era meeting, the 2019 Sustainability Science Days conference. Attending the Degrowth panel, convened by Eeva Houtbeckers and Pasi Heikkurinen, was Katri-Liisa Pulkkinen, with her colleague from the nearby city of Tallinn, Helen Sooväli-Sepping. And she, with her colleague, Bianka Plüschke-Altof, was preparing a journal issue. Emails were exchanged, lunch squeezed in on an unrelated visit to Tallinn, etc.

Such geography, like geography and scale generally, matters to our paper. And economics matters. We may be unhappy with Helsinki’s urban policy, but don’t want to blame, as local discourse tends to, either globalization or (greedy) local decision makers. It’s more that Helsinki’s “entrepreneurial real estate policy [as] practised both by the state and cities [has] had harmful consequences and created conflicts in Finland” (in Mika Hyötyläinen and Anne Haila.  2018. Entrepreneurial public real estate policy: The case of Eiranranta, Helsinki. Geoforum, 89, 137-144.)

Our paper is titled ‘Growth in WEIRD Helsinki:  Countering Dominant Urban Politics and its “Green” Pretentions‘. In it, Guy and I draw on our own research in Helsinki, and on Harvey Molotch’s simple but powerful idea of ‘the city as growth machine’. (It’s horrific to think his paper, published in the American Journal of Sociology, dates from 1976. So much time lost to not learning.)

In our paper we play with the idea that Helsinki, like many apparently ordinary cities of the wealthy world, is weird. We believe that needs to be addressed.

We found the idea of WEIRD, in our title, Western, Educated, Industrial, Rich and Democratic, in a 2017 paper by a team of social psychologists. It’s good for self critique. When that list is mistaken for “humanity”, as it often is, it points at a crisis of academic imagination that is devastating for efforts to deal with humanity’s multiple technogenic crises. (Consider, if necessary, your recent media intake or consult the Stockholm Resilience Centre). It really is shocking that even the science of human possibility (psychology) fails to appreciate how peculiar Western culture (in all the vagueness and hubris of that concept) actually is.

Our paper is more specifically about economic growth as a taken for granted aspiration. Helsinki is used as an illustration of how economic growth becomes elided with progress. What you get is a kind of politics that is not about creating social value or about the resilience of regenerative processes so much as about the perpetuation of a normality that suits the winners of capitalism.

We also note that there is considerable weirdness to Helsinki’s ambitions to be like New York City. 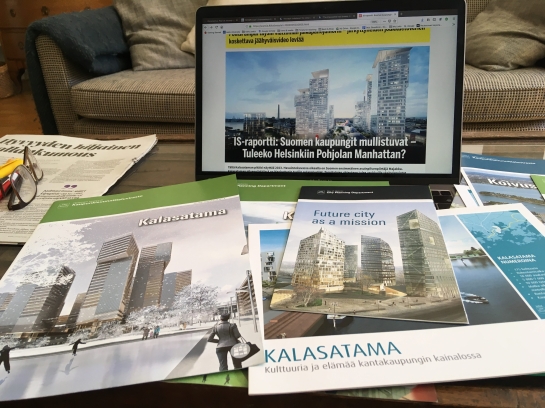 Despite persistent concerns over sustainability, cities continue to be developed that serve capital more than citizens. Where urban politics prioritizes growth, ‘green’ credentials easily turn out to be illusory. Helsinki, with its pro-environmental administration, is an example of combining ‘green’ agendas with a culture of growth and depoliticizing debate. This essay presents two cases of this broadly ecomodernist approach. In one case [Vartiosaari] it led to proposing the destruction of irreplaceable green space and in the other [Kalasatama], to drawing residents into international circuits of finance and data. This problem does not just emerge from corporations and elites, however. Drawing on Harvey Molotch’s idea of ‘the city as growth machine’, we suggest that growth ideology reflects a culture that, following psychologists, we might call WEIRD:  Western, Educated, Industrial, Rich and Democratic. Its claims are founded on a historically particular but widespread conception of global progress that is increasingly questioned.

Vartiosaari remains in the news, though mercifully it’s not massively changed since the photo below from 5 years ago. But so long as growth continues to orient urban policy, this exceptional island within Helsinki will appear to decision makers and the construction sector as empty space waiting for them to fill it.

The small piece of good news is that a new boat connection is up and running, allowing for more visitors in the summer. As explained on the city’s website, the boat is solar powered and the project benefitted from Helsinki’s participatory budgeting.

The debate about what here is weird (or weird-like) is already here, I’m pleased to report. Critiques of growth like ours can be heard here and there, thanks in part possibly to the COVID-19 pandemic.

Even in an afternoon paper, Ilta Sanomat (in the photo above, headlining of a potential future Helsinki-as-Manhattan), the debate has begun. For instance, a great column by Saara Kankaanrinta appeared just last week arguing that our world is topsy-turvy. More specifically, we destroy in bulk and care in miniature (to do a very loose translation).

For instance bug hotels are important, but if meanwhile our land use disregards the needs of biodiversity, we will be re-arranging (screwing in) our bug hotels as the Titanic goes down.