Yesterday, at the end of the Anthropology conference here in Helsinki, with my friends and co-editors Anu Lounela and Timo Kallinen we launched our new book, Dwelling in Political Landscapes: Contemporary Anthropological Perspectives. Published by the Finnish Literature Society, it’s a fine 293-page volume to acquire as a hard copy. It’s also available as open access.

I believe it’s a pretty timely publication. Even the links between climate change and land are now newsworthy. As we write in our introduction to the book, people everywhere are experiencing new hazards and unprecedented situations as their environments change, sometimes at speeds never before experienced. The book’s examples are from the extractive industries, commercial conservation and massive wind-power projects but also from more ordinary, almost imperceptibly unfolding processes of locally disturbing landscape change.

It’s the putting together the here-and-now with the over-there-and-then that helps us to appreciate the complexities and politics of living in this globalized world, with its shocking levels of unsustainability. Making these links stops us from assuming that that power, justice and injustice, or environmental or architectural damages for that matter, always come from somewhere else.

(That’s why as part of Helsinki Design Week, our ad hoc ‘walking collective’ Narratiimi, is kicking off what will hopefully be a series of walks to explore how Helsinki fits into a bigger picture of sustainable urbanism, but more about that later).

Still, if I was to take a walk on this fine Saturday afternoon, I’d probably not have political struggle and conflict on my mind. I’d be venturing out into and becoming part a great urban landscape. My gaze would rest on interesting people, beautiful architecture, sun-dappled sea and verdant parks. I would hear its sounds and feel its air.

These are and will hopefully remain excellent aspects of taking a walk in Helsinki. But with training in anthropology and planning, and some understanding of design, my attention is often drawn to the city’s political things. They are often also ordinary.

I’d find it hard to ignore bits of urban infrastructure that facilitate some personal preferences and complicate others (mostly I notice how much has been built to ease the flow of cars). I’d encounter lots of machines (designed to be inviting) for governing the city with the help of computing, something Shannon Mattern eloquently lays out in this text.

I’m also routinely surprised by new and often strikingly large buildings that go up in just a few weeks.

This very ordinary, perhaps even ugly landscape below, in Sturenkatu, photographed two summers ago, is gone. Now it’s flats. 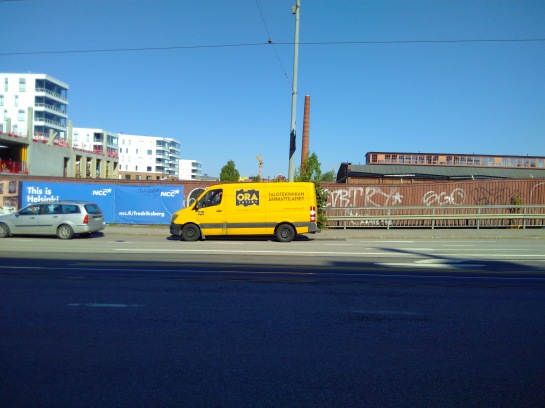 We can’t have big skies as well as affordable homes (though actually, maybe we could) so what, exactly, should be built in such places is the topic of local political wrangling. But it’s not unconnected from a global phenomenon of accelerated and profit-driven urban growth.

My hope is that a debate that has started among some academics could be pursued in Helsinki too around norms and expectations about urban growth. It could help question imperatives to grow the city for the sake if ” competitiveness” and even maybe reform the planning culture that’s increasingly about light-weight participation and greenwashing if not just in the service of capital.

I made a start in my own chapter in the book, which I tried to write in a way that would not put off non-academics. (Here’s that link again).

And there is hope. For example, an eloquent playwright and director, Juha Siltanen, is quoted in today’s (Finnish language) paper saying that a completely new geography awaits us, demanding new ethics and new scripts (the theatre metaphor works, I think), as expansion ceases to be possible. I like the image of something spreading out, burying landscapes everywhere until there is nothing left for it to cover over.

Helsinki will not be spared the damages if this expansionism continues. More importantly, even here our landscapes are suffused with politics and local choices, no matter how ardently this may be denied.