I’ve been musing again on a life-long problem: why doesn’t everyone react with the same alarm to environmental change as I do? Why won’t everyone (and not just isolated if amazing heroes like the striking Swedish school girl) demand that those with power use it to stop the Eart from broiling? 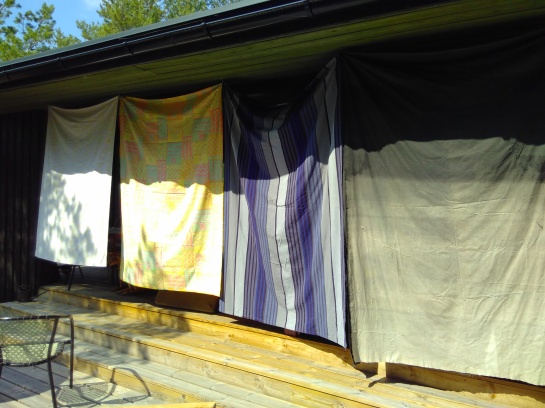 As ever, I’ve looked for clues in literature.

I particularly enjoyed a volume on Economic Science Fictions edited by Goldsmiths-based William Davies (2018) and a short book cited therein, by Peter Frase called Four Futures from 2016. I also looked at David Pilling’s journalistic Growth Delusion, and finished going through a special issue of Ephemera Journal on Degrowth from 2017.

I’ve also been reflecting the readings against the freakishly hot summer.

I started to write this post, laptop on lap, from a small island in the Baltic. I sat not uncomfortably on the end of our jetty enjoying the best of a weirdly warm breeze.

Undoubtedly the most significant inspiration for my becoming an environmental anthropologist has been that place. Like many Helsinki kids, I was transported each year to be “close to nature” away from school and city distractions. A few weeks in a comfortable if simply equipped cabin with water to swim and fish in and rocks and woods to run around in. 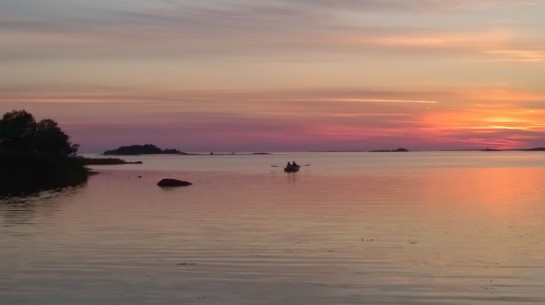 Drinking-water still has to be carried there. Waste is composted or combusted or it gets carted back to the mainland. Here is a perfect spot for learning about environmental change: annual fluctuations in seaweed and algae express the state of the Baltic. Not good.

Over the years it’s been wonderful watching sunsets. Gradually I’ve learned to listen to birds and look out for fish, elk, deer, and lately, ticks. But the small changes have been incremental and often for the worse.

This year for the first time, I ended up doing what I could to keep the cabin cool. (See the photo above, top).

I also cut reeds for the first time. Although good for cleaning impurities from the water, they were also threatening to suffocate a lagoon. People have been enjoying warm swimming there since the late 1950s and no doubt before. A “first world” loss and not THAT unpleasant a job. But not an insignificant thing in terms of ecological health.

Nice to escape into books. What was a pleasure about my summer reading was that the texts spell out confident versions of environmentalism. They have no truck with so-called climate sceptics, and they are happy to muddle along in a broad-brush cognitive space in which events out there in the world demand radical responses.

Now, as fellow anthropologist Hannah Knox argues so lucidly, we can’t be sure the heatwaves were “caused” by carbon emissions. But we can be pretty sure that what we think of as normal and even desirable is paving the way to climate chaos. If economic growth continues as the default aspiration through which we try to maintain something like social cohesion, disasters small and large, of many kinds, are sure to come, and quite soon at that.

That all sounds a bit vague. So did the rather alarming heat maps that peppered the media this year. But then progress and economic growth are really extraordinarily vague co-ordianates by which to order social life too.

So, those books. They make vague but strong claims about how we, the primary beneficiaries of global capitalism, have produced this mess.

It was rewarding to read about what we know has happened and what kinds of responses are already being undertaken. These were more than could-be and should-be sustainability talk of the kind my friend Cindy Kohtala has warned students about. (Although there was inevitably a little of that too.)

Particularly Davies’ edited volume stridently turns on its head the economic thought I’ve always felt surrounded and suffocated by. The volume explores imagined worlds from literature, film and planning, whose notions of economics highly consequential and yet also fantasies. Embarrassing perhaps, but I had no idea so much science fiction, and “cli-fi”, was out there, dedicated to questioning progress, innovation, economic growth and other Europe-centred modern virtues!

There is still a problem though. For all that the zeitgeist encourages talk of the harms created by devotion to economic growth, to mention growth scepticism still courts ridicule or disapproval. Somehow it just isn’t polite to talk about climate change.

What is and isn’t polite is of course the stuff of anthropology. In all societies there are some things that are considered too dirty or shaming or dangerous to talk about. And usually the most powerful people are able to ignore them or pretend they don’t apply to them.

Which links climate and other environmental crises to the not-so-thorny problem of whether or not royalty goes to the toilet.

What a depressing thought, that link.

Making it does, I suppose, reinforce my belief in the importance of environmental anthropology. I see few signs of it getting much support or authority, but perhaps this is about to shift. The zeitgeist and those temperatures, after all. Of course they go to the toilet.

p.s. This poster by Finnish graphic designer Kyösti Varis riffed on a similar theme back in 1970. “The ball is in our hands” it says.